Home / Interactive Garden / The Gardens / Fish in the Paths?

Fish in the Paths?

Why on earth are there fish in the paths of Kincardine Castle Garden?

We go back in time over 2,500 years to the reign of Cyrus the Great (559-530 BC) in Persia.  “I am Cyrus, king of the universe, the great king, the powerful king, king of Babylon, king of Sumer and Akkad, king of the four quarters of the world”.  The Cyrus Cylinder (Line 20)

Cyrus constructed the oldest known surviving example of a Persian Garden (at Pasargadae, in present day Iran). It was an enclosed garden built with the purpose of providing protected relaxation – spiritual and leisurely – in essence a Paradise on Earth.

It is no accident that in old Persian the word for ‘walled around’ is paradaiza, this became Parádeisos in Ancient Greek, Paradisus in Latin, Paradis in French, Paradies in German and, of course Paradise in English.

Cyrus’s garden was a four-part garden, a Chahar Bagh. The four quarters, symbolising Cyrus’ four-quarters of the world, were separated by aqueducts leading to a central water feature. Water was essential in arid Persia and underground aqueducts were built to carry water many tens of miles from the hills. This is a sketch of Cyrus’s Walled Garden.

​The four-part garden became a pattern for Persian Gardens. You can see much more recent examples at Humayan’s Tomb in Delhi or at the Taj Mahal in Agra (below) both relics of the Mughal Indian Empire. In this case the four-part garden has been itself sub divided in a fractal sequence at least three more times. 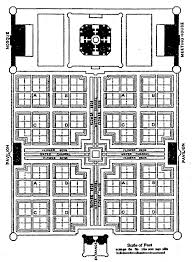 The design spread far and wide and it is intriguing to compare Cyrus’s design with the Walled Garden at Kincardine which, before it was extended, was a typical four-part garden. Being in the north of Scotland, however, we have no need for aqueducts, so they have been replaced by paths. If Cyrus the Great saw the Kincardine walled garden today he would find the design very familiar.

​These gardens were so important that their design was replicated in Persian Carpets. ​Here’s a typical example.

Following the completion of the present castle in 1896 the Kincardine Walled Garden was enlarged to meet the increased need to supply food for the larger household. Clearly enlarging the four part design to six part or larger was not uncommon – here’s an example in another carpet from the mid-17th century. The general layout is remarkably similar to the current Kincardine Walled Garden.

In both the above carpets you can clearly see the aqueducts with running water in them. What’s in the water? Fish of course.

So, now you know why there are fish swimming in our gravel paths.

Would you like to learn more about Kincardine Castle & Estate? Please get in touch with our friendly team for more information.

Some kind words from our previous guests…

“We had such a lovely stay at the castle for the Luthman/Snell wedding. The breakfasts, cocktail hours and our dinner on Sunday evening were all equally wonderful and fit for Royalty! Thank you so much for the hospitality and making us feel so welcome in your castle-home”.  April 2016